Mascún natural spring, rock needles, the deserted village of Otín, the Romanesque church of Nasarre, the dolmen of Losa Mora.

This full day excursion will take you deep into the Mascún canyon, which is simply one of the most spectacular and emblematic natural landscapes of the Sierra mountain range.  It is known for its fantastic rock formations and other striking features, such as the megalithic stones of Losa Mora and the Romanesque church of Nasarre.

The route begins in the Honguera district of the village of Rodellar.  From here take the footpath that leads down to the fluvial bed of Mascún river, keeping your eyes open for the rock-climbers that dot the craggy canyon walls.  Once you have reached the bottom, the path will wind its way to the Mascún spring where water flows from the rocks.  This fresh water is safe to drink, so fill up containers if necessary.  Continuing along the path an arrow will point the way to the Dolmen of Losa Mora to the left, situated deep in the Adrebot Ravine.

After covering a good part of the climb along the narrowing ravine you will reach the area known as the Pardina Seral, where it is still possible to make out the remains of old cultivated terraces on the slopes: long since abandoned. The path heads north across a small gorge before reaching a high ridge with spectacular panoramic views over the central Pyrenees.  At this point, it is possible to visit the Dolmen of Losa Mora situated to the right of the path.

A few metres ahead there is a fork in the track.  One path leads to the uninhabited hamlet of Nasarre with its well-known Romanesque church, which has been declared a Building of Cultural Interest.  Following the other path to the right, signposted as the Historic Path GR1, you will pass by the Pardina of Villanúa before arriving at the small village of Otín, also uninhabited.  From Otín take the path known as ‘La Costera de Otín’ to head back to the village of Rodellar.   This is one of the best known paths in the Sierra de Guara as it is the route that shows the magnificent grandeur of the Mascún Canyon at its very best.  The geological formations known as Ciudadela and the Cuca Bellostas are particular highlights, and are emblematic of the canyon.

Once you have reached the waters of the Mascún river you will rejoin the original path taking you back to Rodellar. 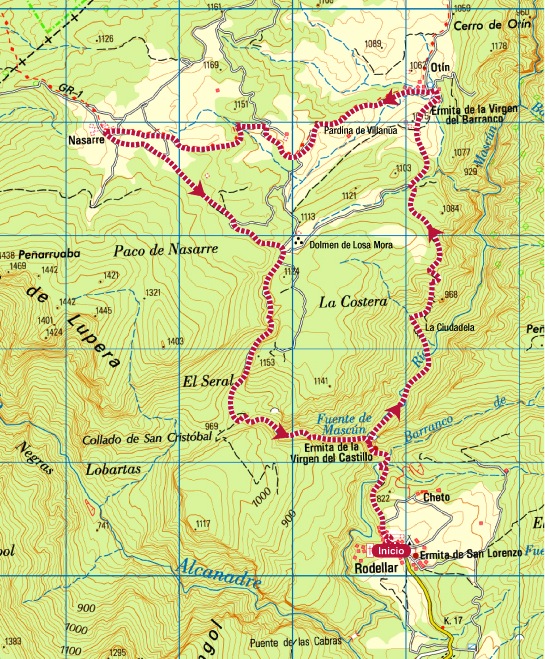 Route to the Tamara and el Puntillo Springs. Bierge

Route to the shrine of la Virgen del Castillo. Rodellar

Route from Pedruel bridge to the Shrine of la Trinidad. Pedruel

We use cookies on our website. Some of them are essential for the operation of the site, while others help us to improve this site and the user experience (tracking cookies). You can decide for yourself whether you want to allow cookies or not. Please note that if you reject them, you may not be able to use all the functionalities of the site.